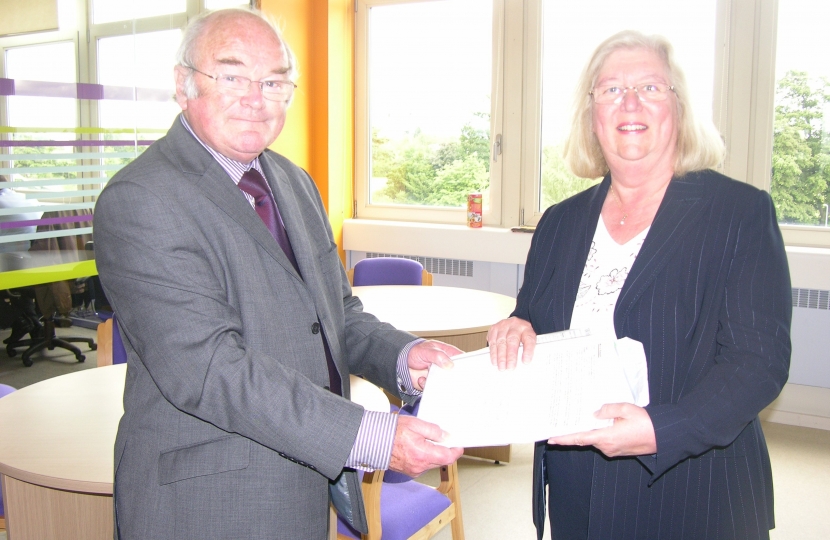 Conservative County Councillor for Bosworth Ivan Ould today handed a petition signed by nearly 1000 residents from the parishes of Sheepy and Witherley, directly affected by proposals to remove the No 7 Bus route.

Ivan Ould says, “This petition is a snapshot of local feeling against the proposals to remove the Number 7 bus and replace it with a Demand Responsive service. Unlike other areas that have seen their local services eroded, this service could quite easily be saved from the axe if Officers listen to the depth of local residents’ feelings against the proposals.  Witherley and Sheepy parish councils have already made their viewpoints known in the consultation and have offered proper and reasonable counterproposals, which, if recommended for acceptance by Officers to Cabinet, will see the Number 7 saved.”

Lesley Pendleton said, “It is true that I have been inundated with pleas from local residents to save this service. Another 1,000 voices have now been added to the campaign and I am grateful to Ivan Ould for presenting me with this petition. I will ensure it is placed front and centre on the Director of Transport’s desk.”

Bosworth’s Conservative MP David Tredinnick has also added his weight to the campaign by sending a letter to the Director of Transport, Matthew Lugg. David says, “The Number 7 bus is clearly a much valued service to the communities within the parishes of Witherley and Sheepy. I would urge the County Council to do all it can to facilitate the continuation of this service which is vital to one of the rural areas of the County.”