The Gartree Division in 2021 consists of 22 parishes across four Harborough district wards (Billesdon, Glen, Kibworth & Tilton) and can be classified as a deep rural community. This presents specific problems with limited public transport, some small primary schools, restricted access to public libraries, although there is an excellent mobile library service, few post offices or shops and reduced opportunities for some leisure activities. There is a website that includes latest issues etc. about the Gartree Division: http://gartree.yourcllr.com/

I attend many parish council and meetings in the Division to provide headline information about the county council and to listen to and advise in most cases on issues arising.  It is a great way to better understand local concerns. I can then liaise with the relevant MP or department at the county or district councils depending on the issue..

from 2007 to 2009 Kevin chaired the Campaign Against the Stoughton Co-op Eco-Town (CASCET) which lobbied successfully to stop a 15,000 housing development north-east of Great Glen and around the Stoughton Airport location.

During 2009 and 2010, Michael Wood, the TV historian, and Maya Vision, an independent production company, hvisited and filmied in Kibworth Harcourt, Kibworth Beauchamp and Smeeton Westerby (the ancient parish of "Kibworth") to make a series of six one hour episodes in a series "Story of England" on BBC4 and BBC2 which were shown during the autumn 2010 and subsequently.  As a follow-up and to ensure there is a lasting legacy from the publicity, I worked with various business and community organisations to form the Kibworth Improvement Team (KiT) to ensure the TV series was beneficial to the villages in terms of publicity, and to bid for grant funding for specific heritage projects, through a new website portal - www.kibworthvillage.co.uk, a new Kibworth Guide Booklet containing details and maps of the heritage locations in the three villages. We also involved the local schools so community history aspects were incorporated into their project work.  The bid that I put together for the Heritage Lottery Fund was successful in May 2011, and KiT were awarded £48,200 for Heritage projects. 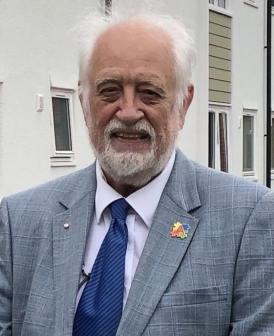 Kevin attends a number of parish council meetings every month (he is also chairman of Kibworth Harcourt Parish Council) when invited and sent the agenda, and is always happy to attend parish meetings, when invited. With so many parishes in the Gartree Division, the casework is always stimulating and varied.

My 2021 County Council election address leaflet is attached below including the common pledges for the Conservative Group.  Please contact me using the details under my photograph on this page, if you have any questions or would like me to visit and discuss any of the points in more detail.